Monterosso, Vernazza, Corniglia, Manarola, Riomaggiore: five jewels set between sea and mountains which leave you breathless for their beauty.

The starting point for our Cinque Terre activities is Monterosso at Bagni Fegina, via Fegina 11.

The easiest and fastest way to get there is by train, Monterosso al Mare stop.

Leaving the station of Monterosso, turn right and walk for approx. 5 minutes, keeping the sea on the left.

You’ll find the beach Bagni Fegina on your left, after the car park, the soccer field and in front of  “Focacceria Antonio”.

The activities take place in the Cinque Terre National Park and in the neighboring areas of Portovenere and the islands of Palmaria, Tino and Tinetto.

A different way to visit all the Cinque Terre – Monterosso, Vernazza, Corniglia, Manarola, Riomaggiore – is to explore them from the sea: with our kayak and sup tours, you can admire an evocative landscape far from the tourist crowds and have glimpses of breathtaking panoramas from unusual perspectives.

Small villages with towers and narrow roads, Mediterranean scrub, agaves, spectacular layers of limestone rock, caves and turquoise waters. The Cinque Terre, together with the islands of Palmaria, Tino and Tinetto, are a UNESCO World Heritage Site, National Park and Marine Protected Area. It is famous the Via dell’Amore, a path that connects the villages of Manarola and Riomaggiore, between the overhanging sea and the terraces cultivated with vines.

The dry-stone walls, supporting the terracing, have also become part of the UNESCO World Heritage Site since November 2018. The impervious and steep territory is known for the production of wines such as the “Sciacchetrà” and the “Cinque Terre”.

The area of the Cinque Terre stretches between Punta Mesco and Capo di Monte Negro beyond which kilometers of cliffs will lead directly to the entrance of Portovenere, recognizable by the preponderant figure of the church of San Pietro.

Monterosso, Vernazza, Corniglia, Manarola and Riomaggiore were built around the 11th century. Until the 18th century Liguria was subjected to pirate attacks: the construction of towers and narrow roads – commonly named “carruggi” – ideal for the defense of the territory are now elements characterizing all the locations. Examples are the Aurora tower in Monterosso and the Castle in Vernazza, still in excellent condition.

The conformation of the coast of Cinque Terre does not allow the development of real ports. The typical fishing boats are still today as in the past put at sea and brought back up every day with the use of slides. During windy days or sea storms, it is particular to sight the boats secured in the alleys and in the small squares.

Another common characteristic of the area is the color palette, with its faint yellow, orange and intense red façades, the light or dark gray cliffs, the blue and turquoise water.

It is possible to move between the villages using the paths of the park, by train or by sea, therefore admiring them from different angles.

The beauty of this stretch of coast is now thoroughly preserved and protected by indiscriminate anthropization.

The meeting place for the excursions in Cinque Terre is at Bagni Fegina in Monterosso. The area, rather crowded throughout the year, does not have large parking space. The easiest and fastest way to get there is by train, Monterosso al Mare stop. Leaving the station of Monterosso, turn right and walk for approx. 250m, keeping the sea on the left. You’ll find Bagni Fegina on your left, located on the last equipped beach of the promenade after the car park and the soccer field.

The National Park of the Cinque Terre with its 3,868 hectares is the National Park among the smallest in Italy and at the same time the most densely populated, with about 4,000 inhabitants divided into five villages: Riomaggiore, Manarola, Corniglia, Vernazza and Monterosso.

Here, in more than a thousand years, humans have “modified” the natural environment by cutting the steep slopes of the hills to obtain strips of cultivable land, the so-called “ciàn”, supported by miles of dry stone walls. This is the true identity of Cinque Terre, with an atypical and strongly anthropized landscape: that’s why it is the Park of Man, a territory that has become a World Heritage Site.

The Marine Protected Area of Cinque Terre includes two A areas of integral reserve and two B areas of general reserve in Punta Mesco and Capo Montenero and boasts an extraordinary richness and variety of animal and plant species. The purpose of the Protected Marine Area is to protect and enhance the natural, chemical and physical characteristics, together with the marine and coastal biodiversity features, also and above all through environmental recovery interventions, making use of the collaboration of the academic and scientific world.

For these reasons, study programs, monitoring and scientific research are constantly carried out in the fields of natural sciences and environmental protection, with the aim of ensuring the systematic knowledge of the area, but also promoting sustainable development of the environment, with particular regard to the enhancement of traditional activities, local cultures and eco-friendly tourism.

The Cinque Terre, erected on a thin strip of land between mountains and sea and far from the roads of great communication, have remained a little apart from the great historical developments. The true history of this area is through the chronicles and stories written by the few travelers who arrived here over the past centuries. The testimony of the daily life of these remote seaside villages, recount a life of misery and hard work, but also of celebration and communication.

Monterosso probably rose, like the nearby Vernazza, as a military port for the defense of the territory against the Saracens. In the 13th century for a short time it belonged to the Maritime Republic of Pisa before passing in 1276 to the Republic of Genoa, along with all the territory of the Cinque Terre.

Vernazza, which owes its name probably to the local wine “Vernaccia”, is the only natural harbor of the Cinque Terre. Here are some remains of medieval fortifications and on the west side the parish church of Santa Margherita D’Antiochia, built in the 11th century and enlarged in 1318.

Continuing south, on a cliff about 80 meters high, you reach Corniglia, village that was also part of the Genoese Republic. Manarola and Riomaggiore share the incredible interlocking architecture, made necessary because of the position of the two villages in very narrow valleys towards the sea. In past centuries, in the valley around the town, it was common to extract the cellulose from the leaves of the poplars, then used for the Genoese paper industry. Thanks to its raised position, the bell tower of the church of San Lorenzo in the past served as a watchtower and defense tower.

The last of the Cinque Terre is Riomaggiore: legend tells that is was founded 1200 years ago by Greek refugees. In fact, the first mention of the village in a historical document dates back to 1259. The name of Riomaggiore comes from the stream that ran between the houses.

The Cinque Terre remained under the dominion of the Republic of Genoa until 1797; after which they passed under the control of the French first and then of the Savoy Kingdom. After the Unification of Italy in 1861, Liguria and the Cinque Terre became part of the new Kingdom of Italy. 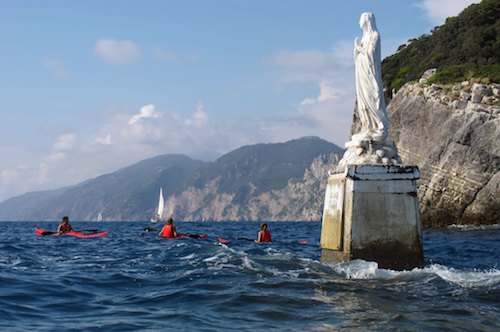